tagged in army lists, orcs and goblins
There is a tournament coming up in the middle of April that I shall be attending. This will mark the first full-scale tournament that features the Swedish Comp System. For this tournament, players must have armies that comp between 10-15, which is about average. For each full point of comp you have more than your opponent, you get a 'free' 100 VP (so a comp 15 army going up against a comp 10 army will get an extra 500 VP). Therefore, I'm planning to field a list that comes in at around 12, to give me an edge against the filthiest lists out there (while still liking my chances against them) without giving up too many free points to the softest lists.

With that said, I will be trying out a few creative solutions to still get a competitive army on the table without it comping too hard. I'm thinking something along these lines...

Anyone who's tried using minimal sized units of Squig Herds with any success? For the same cost as a Mangler Squig, you can get 7 Squigs and 3 Herders. However, for an even cheaper cost, you can get 8 Herders and 2 Squigs.

tagged in orcs and goblins, tactics
Following up on my previous post on What makes a good Hammer unit? I decided to list my top choices from the O&G army book. In the right player, almost anything that hits hard can function as a decent hammer unit, but I feel like the units below are the ones most likely to find consistent success hitting the flank of your enemy while your infantry blocks fight them head-on.

What makes a good Hammer? 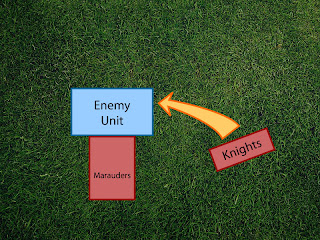 The Hammer and Anvil strategy is a very old, yet highly successful military strategy going back to Alexander the Great (and probably even older than that). Small wonder then that it's a popular strategy in Warhammer as well. But while it can be extremely effective, rarely do I see armies that bring an ideal army setup to execute on the strategy.

For those of you unfamiliar with the concept of the Hammer and Anvil, the idea is that two hostile infantry units engage to the front while being unable to break one another, while the cavalry would come from one of the sides, smash into the flank of the enemy and help turn the tide of the combat in our favor.

Although actual cavalry can be very effective in this role, I've come to depend on a number of different units to serve as the role of the Hammer for this strategy. Here are some of my qualifications for being a good Hammer unit.

After running the post about the Mutant Chronicles Warzone Kickstarter, I got an email from Chris Birch of Modiphius Entertainment informing me that his company will be launching a reboot of the Mutant Chronicles RPG (YESSSS!!!). Now, I know Troll Tales has always dealt almost exclusively in WHFB and O&G in particular - and it will continue to do so in the future - but as I'm a huge Mutant Chronicles fan, after playing both the RPG, the wargame and the card game,  I wanted to take the opportunity to highlight this fact.

You can go to the site for the Mutant Chronicles 3rd edition RPG and sign up for news and to show your support. Apparently, the game will be coming out in December of this year and while it won't have a Kickstarter campaign to get going (as it's already in production) they might consider doing something for fans to gain some additional exclusive content, according to their Facebook page.

Troll Tales is a blog primarily focused on Warhammer Fantasy Battles, detailing both the painting and the gaming side of the hobby. My main army is Orcs & Goblins.

Wot is it about?